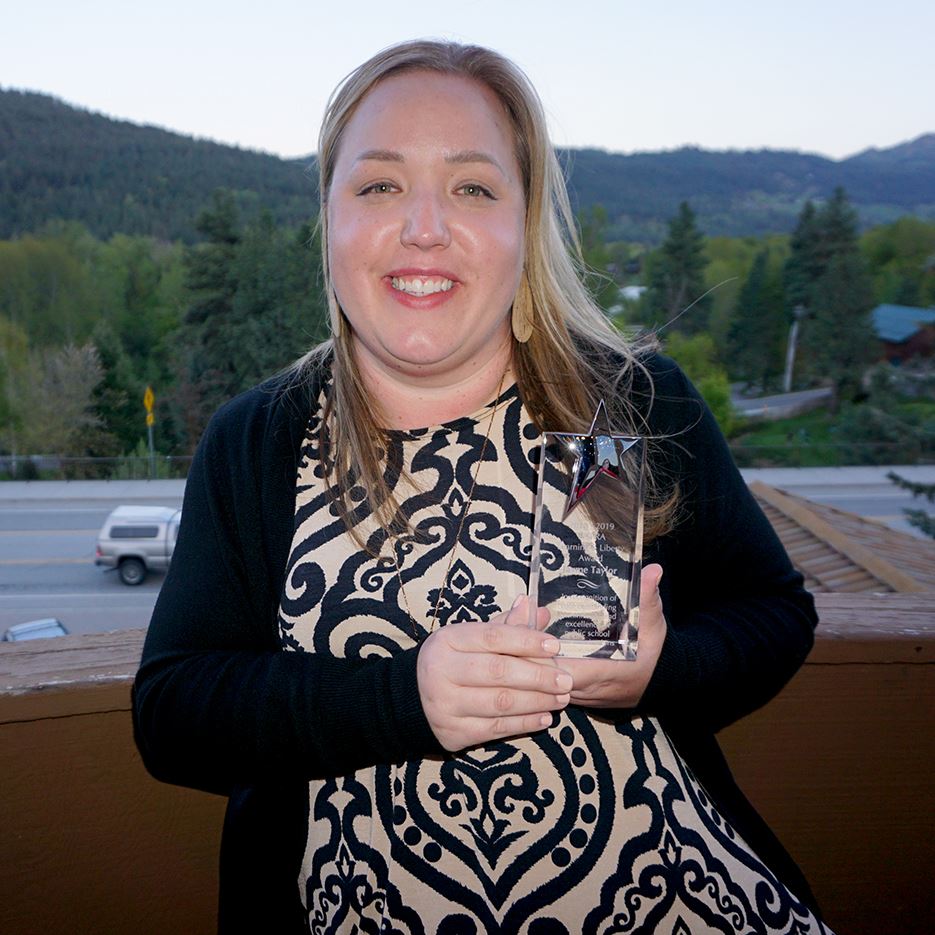 She has grown the department from a one-person shop to a three-member team that brings home top WSPRA and NSPRA publication and media awards each year. She is also the recipient of the prestigious NSPRA Golden Achievement Award for her work on a community education program.

Jayme served on the WSPRA board for seven years, chairs the Snohomish County PIO Group and lends her voice to promote school communications to school leaders across the state.

It is an honor to nominate Jayme Taylor for the Washington School Public Relations Association’s Learning and Liberty Award. Jayme is currently the director of communications for Lake Stevens School District.

I had the pleasure of serving on the WSPRA Board with Jayme during a few of her seven years on the board. Yes, she served for SEVEN years! While voluntarily committing herself to that many years of monthly conference calls, workshop planning, registration managing, budgeting, presenting, problem-solving, emceeing, etc. should check off all the boxes for this prestigious award, Jayme does so much more.

This year, she has chaired the Snohomish County PIO Group, a group of school PR professionals from around Snohomish County who meet monthly during the school year to collaborate and present new and trending information and resources to each other. This has been a huge professional bene t to the many one-person shops that make-up most of the county’s school districts.

Jayme also lends her voice to promote the role of school communications to school leaders across our state. She has been featured in “Washington Principal,” a statewide magazine for school principals, touting the bene ts of connecting with school public relations professionals and offering resources for those that do not have them in their district.

She is also growing the prominence of public relations in her school district. When Jayme took the position in Lake Stevens, it was a one-person shop that had not been regularly recognized in state or national school PR awards programs. That's has drastically changed under Jayme leadership. She has promoted and evolved the role of communications in Lake Stevens School District to one that is now supported by three members and brings home top WSPRA and NSPRA publication and media awards each year. She was even presented with a prestigious NSPRA Golden Achievement Award for her work on a community education program for her district.

Her award-winning work is recognized for good reason. Jayme is exceptional at presenting information is visually stimulating and appealing ways. I know I am not alone in having drawn from her publication design for ideas and inspiration.

Jayme also devotes time to supporting and being a part of her community. She serves as secretary of her children’s PTA at Highland Elementary and also served for a number of years on the board of the Lake Stevens Chamber of Commerce.

Jayme has spent her career supporting and promoting the transformative power of public education near and far. I know that there are many among our ranks who are deserving, but I believe Jayme’s long history of supporting and promoting WSPRA and the field of school communications sets her apart. The examples she sets and her willingness to share and support others makes us all better.