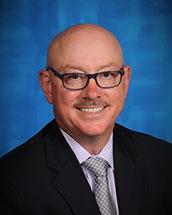 Dan Voelpel has spent his career dedicated to the communication profession, serving the past 10 years as Executive Director of Communications for Tacoma Public Schools. He holds his team and himself to the highest standards of quality, creativity, and integrity.

The WSPRA Board is proud to honor to honor Dan Voelpel is the recipient of the 2020 Learning and Liberty Award.

His leadership has been invaluable to Tacoma Public Schools. During his time in Tacoma, Dan has helped changed the community perception of the district for the better. He has also helped to pass over one billion in capital bonds, including a $535 million bond in February 2020 and two levies.

Dan has also made a last impact on school communications and WSPRA over the years. Here is what some of Dan's colleague say from around the state.

"Dan is hands down the best boss I have ever had. He has an innate ability to bring the best out of those work for him and to support them in their professional endeavors. When I had my first review he asked me where I wanted to go in my career and how he could support me. I have had so many opportunities to attend professional development training's and his support while I went back to school was incredible. He exemplifies integrity and doesn’t shy away from difficult topics. During the 2018 strike I watched with admiration has he calmly and professionally worked through every obstacle. He intentionally put himself out front, often the subject of personal attacks. He explained to me, ‘The strike will end, and the work of bringing our district together and serving kids will be up to our Superintendent. She can’t do that if she’s the face of the strike.’ I often wished others could see how selfless and honest Dan really was during that time. The team environment Dan has created in the PIO office at Tacoma Public Schools is unlike anything I have ever experienced. We are encouraged to bring our ideas, be creative, innovative and even to disagree." - -Kathryn McCarthy, Strategic Communications and Marketing Manager, Tacoma Public School

“Dan has earned the high esteem of his colleagues in school communications for numerous reasons.

“I’ve had the pleasure of knowing Dan for over 10 years, and serving under his leadership during his time as WSPRA president-elect, president and immediate past president. Dan has unequivocally proven himself to be one of the best school communications practitioners and leaders in our state and region. He is quick to extend a lending hand or offer sage advice when other school PR-pros are in a crisis. He does this without hesitation or expectation. More than anything Dan cares about ALL children. The impact of Dan’s work and legacy in school-pr can be seen in the data that correlates to the academic success of Tacoma schools, but it is also found in the concrete and complex stories he helps weave. That is where the heart of our work lives; putting names, faces and personal stories to that data so that it is something that resonates and inspires others to action. No one does this better than Dan. I am honored to support his nomination for the WSPRA Learning and Liberty Award.” -Curtis Campbell, Public Information Officer, Shoreline Public Schools

“Dan is “the man” I go to when I have questions about a challenging problem in school public relations. He always makes himself super available to his colleagues and is quick with a return call or text. His calm, integrity and of course dry sense of humor is such a wonderful combination for a leader in our field. He has lived through and survived some major school district challenges and crisis that we have all learned from in return. He’s always there to cheer the rest of us on and has been a great mentor and friend. He’s probably one reason I have stayed “in the business.” I believe he is highly deserving of the WSPRA Liberty and Learning Award.“ - Courtney Schrieve, Executive Director, Public Relations, North Thurston Public Schools

“I am lucky to have worked under the leadership of Dan Voelpel. Working in an office led by Dan was a joy, in large part because of the atmosphere of creativity and collaboration he created and nurtured. I was impressed by his steadiness in the face of crisis, particularly as he placed himself in the line of fire during an acrimonious teachers’ strike, calmly making himself the target of anger and verbal attack so that others in district leadership could focus on reaching a resolution. As a newcomer to school-PR, I was fortunate to have Dan as an example and teacher. He taught me a lot, particularly the importance of ensuring that all messaging serve the district’s goals and keep students in mind. And when he saw an opportunity to help me to advance in my career, he seized it, having seen potential in me that I hadn’t even recognized myself.” - Devin Felix, Assistant Director of Communications, Issaquah School District

“Dan exemplifies what it means to be a communication professional and servant leader. He is creative, enthusiastic, humble, thoughtful, and genuine. Under his leadership, the District has increased public awareness and understanding of the people, programs, and positive outcomes in Tacoma Public Schools through storytelling that humanizes individuals and emphasizes the power of relationships. TPS, the City of Tacoma, and public education are all better because of Dan’s intentional work.” - Scott Heinze, President, Tacoma School Board

“Dan Voelpel is stand-out professional in our community because he doesn’t just talk a good game, but he models kindness, humble expertise, sturdy balance, and constant youthful curiosity to keep learning from others - both in the field of public affairs and in life. For the past 10 years, I’ve worked with Graduate Tacoma, a movement of more than 200 Tacoma community partner organizations in collaboration with Dan and Tacoma Public Schools. Dan has helped create a new norm of transparency and shared ownership with the community. Most recently, I’ve worked with Dan on passage of the largest school improvement bond measure ($535M) ever attempted by Tacoma Schools. His innovative and relentless efforts to create awareness and build shared partnership with the community helped produce a 69% YES vote in February 2020. Dan’s nature is one of quiet humble leadership. Dan is never one to claim credit, but to share it and he models inclusive leadership that is adopted by not only his team, but so many around the broader Tacoma community that Dan loves and has dedicated his life to making a better place.” - Eric Wilson, consultant and former President of the Foundation for Tacoma Students